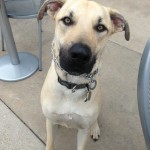 It’s been such a busy winter! I’ve been playing a lot at day camp while dad works and it makes me so sleepy! I’ve gotten into just a little trouble, mostly in the morning by chewing up dads backpacking gear and socks. I love socks, especially dads running socks, so tasty. I also met Thumper face to face by accident. Dad saw me and let me meet him. Thumper is this thing dad calls a “bunneh”. He runs around and thumps! He smells like other things I’ve seen outdoors, I see other doggie friends chase them but for some reason I don’t want to. I’d rather eat their poop and put my cold nose on them which makes them do something called a “binkie”. Napa is another “bunneh” that lives with dad and I, she is HUGE and she isn’t afraid of me. She just walks up to me, rolls her eyes and wanders off. I have also been in training this winter and became a service dog! I got a new collar you see in the picture and only wear it while training. Some people have said bad things about the collar but it doesn’t hurt me like they tell dad it will. What they don’t know is dad put it on himself and pulled as hard as he could. He said it’s just annoying but not painful. I have two layers of thick skin and fur whih dad doesn’t have so it doesn’t hurt or even annoy me really, it just lets me know to stop because a car is coming, or other bad things that CAN hurt me. Well that is all for now!