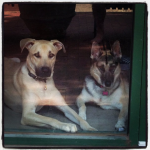 Dad told me I couldn’t post this until we were absolutely sure but says I can now! I have a sister! 🙂 Dad agreed to help a friend by taking a stray German Shepherd that they had found but couldn’t keep. He said he would foster her and find her a new home but decided to keep her. He said “yay more mouths to feed!” he sounded excited about more mouths to feed! He’s silly sometimes. I think Nymeria, that’s her name, “Nym” for short had a hard life. She was really scared when she first came home two weeks ago but she is getting better. She isn’t scared of dad anymore and she plays with me now a lot more. She still lets me know when she’s had enough with a deep growl but she never bites me unless it’s play biting. We have been to the dog park several times and every time we go she plays with other dogs a little more. She is very smart. She knowns where her crate is and goes in when asked. She also knowns her name already.

She DID steal my spot on the couch though but most of the time we share it and we both (sort of) fit in dads bed. When we need more room we just kick dad out. 🙂 She likes the bunnies a little more than she should but she leaves them alone for the most part. Maybe Nym will make a post here soon! 🙂